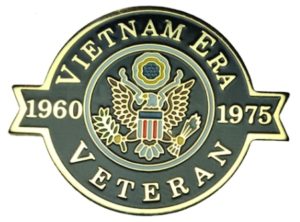 I have 35 of the pins left and will sell them on a first come first serve basis to any of our members who want one. The pins sell for $10 each, but I will let any of our members have one for $5 each plus $3 shipping. If you would like to own one place your order now by emailing me with your mailing address and I will reserve one for you. After I confirm your order and receive payment I will mail the pin to you. Submit your order by emailing me at [email protected]

Although the salute below was directed at the reunion attendees, when I wrote it I had all of our career field Vietnam veterans in mind. If that’s you and you did not attend the reunion, I’m so sorry you were not there so we could have honored you.

April 30 of this year (2016) marked the 40th anniversary of the fall of Saigon and the capture of South Vietnam. This signaled the official end of the Vietnam conflict.

Unofficially, though, that conflict continues in the hearts and minds of so many of our beloved Vietnam veterans; their family and descendants.

The United States Air Force provided tremendous and diverse contributions in Vietnam, beginning as advisors in the 1950s and ending with large bombing operations in the early 1970s.

Many of us in this room supported those efforts. When President Johnson in 1965 ordered Operation Rolling Thunder, we were there.

When the USAF served in close air support operations with modern fighter-bombers, we were there.

When Military Airlift Command evacuated over 400,000 medical patients between 1965 and 1973, we were there.

When Rolling Thunder ended and Vietnamization began in late 1968, the USAF continued its bombing campaign in southern Laos and Cambodia, we were there.

During Operation Linebacker I, from May to October 1972, when the USAF dropped over 150,000 tons of bombs over North Vietnam, we were there.

When President Nixon ordered a second Linebacker operation in late December 1972 and the bombing resumed over Hanoi during the day and Haiphong at night, we were there.

And when the war was over, and transport aircraft evacuated hundreds of prisoners of war and thousands of civilians from the region, we were there.

Yes, we were there providing countless hours of inspections on flight equipment, configuring and de-configuring transport aircraft with lifesaving equipment, inspecting, installing and removing parachutes and survival kits on helicopters, tankers, C-130s, C-141s, C-5s, F-4s, F-100s, F-111, A-7 Skyraiders, the AC-47, and B-52 bombers. The Life Support Officers in the audience probably flew some of these aircraft.

Many of us worked 12 hour days, 7 days a week pre-flighting life support equipment on board some of those aircraft that we knew had a good chance of being used in a life or death situation. Some of us spent hours conducting Life Support training for crewmembers who everyone knew were possibly going to be shot out of the sky, captured or killed. Yes, we were there and we performed our responsibilities admirably.

If you served in South East Asia or Guam between 1960 and 1975, please stand. Ladies and gentlemen, give these members a hand for the part they had in the safe return of our crewmembers in Vietnam.

If you served in the USAF anywhere in the world between 1960 & 1975 please stand. You are as defined by Congress and the Department of Veterans Affairs, a Vietnam veteran.

Thank you all for your service to our country.

Please come forward to accept a token of our appreciation, a Vietnam Veteran lapel pen. Let’s give them all a hand.