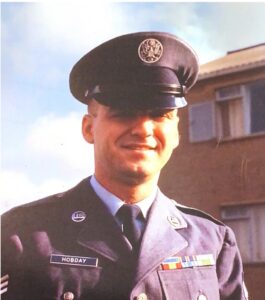 SMSgt. Robert L. Hobday USAF (Ret.), passed away at the age of 78 at the Masonic Village Healthcare Center on February 11, 2022.  His loving wife and family were by his side.  Known to most as Bob, he was the son of the late Hilda Hobday of Columbia.

Bob is survived by his wife, Pat, three sisters, Jacqueline, Sandra and Pamela and two brothers, Charles and Kent.  He is also survived by many nieces and nephews.

Bob was a graduate of Columbia High School and played for the Crimson Tide football team.  Shortly after graduation, Bob joined the United States Air Force.  While stationed in England, Bob met the love of his life.  This began Bob & Pat’s 54 years of happiness together.  He retired as a Sr. Master Sergeant and was extremely proud of his 23-year military career and accomplishments.

After retirement Bob obtained his college degree and enjoyed a second career as the Information Technology Director at Trident Technical College in Charleston, South Carolina.  While there he earned several awards for his accomplishments.  After retiring from Trident, he and Pat chose to move back to Lancaster County to be closer to family and settled in the Masonic Village of Elizabethtown.

Bob was a Master Mason and was a member of the Columbia Lodge #286 Free and Accepted Masons.  He devoted endless hours studying and researching the history of the Masons and making many presentations.  His goal was to write a book on his findings.

Bob had great faith and he loved the lord.  He attended church at the Village.  His favorite pastimes were spending time with his wife and taking long daily walks around the campus.  He also enjoyed photography, delighting in the beautiful gardens and animals on the grounds of Masonic Village.

Bob was a very proud and humble man.  He had a big heart and cared about everyone, always willing to lend a helping hand to anyone in need.  He will be remembered for his gentle smile, glint in his eyes and caring nature.

The family would like to thank the Staff at the Masonic Village Healthcare and Hospice for taking good care of Bob and making him comfortable in his final days.

Donations may be made, in Bob’s memory, to the Masonic Villages, Office of Gift Planning, One Masonic Drive, Elizabethtown, Pa 17022.

If you would like to send a condolence message to the family, please click here and fill out the form at the bottom of the page.